Home/Flying/Flying a light jet
Previous Next As many of you know, I am a pilot, and for the last 15-20 years, my plane of choice (that I can afford and has a reasonable mission profile) has been an older V35 Bonanza. I love the plane, I can load 4 people plus luggage and full fuel and fly over 1,000 miles.

The freedom you get from this is amazing. I have flown from Phoenix to Lake Placid, NY, all over California, the midwest, Utah, Texas – we used to fly to South Padre Island from Phoenix every year.

But… fuel prices have risen, and aviation fuel, in particular 100LL, has become quite expensive. And flying a plane that burns 16-18 gallons an hour starts to really hurt. I went out to fly a couple years ago, and I saw that the last time I had flown was almost a year earlier. Not good. Not only not good for the plane, but just not safe.

Sure, I always did the flight reviews and such, and occasional instrument flight checks, but my attitude, in a plane like a Bonanza, is that you ought to be flying at least monthly to stay on top of things. And I wasn’t, so for this and other reasons, I ultimately sold my wonderful plane. I hope the buyer is enjoying it as much as I did. At least it is flying more.

Recently, I had a family member who became ill. They were wealthy enough that they could charter a small jet to fly to places for treatment options, and also to see other relatives, as she was unable to travel via the scheduled airlines. [And there is that freedom thing again where you can bring a full sized tube of toothpaste, a bottle of bourbon if needed, and it is on YOUR schedule.] 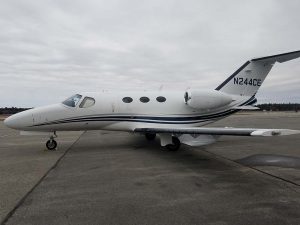 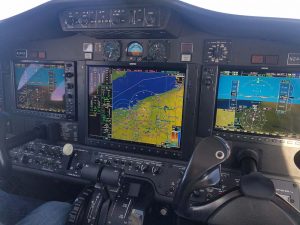 On one of the trips, I was privileged to be invited along, and I got to sit in the right seat of a Cessna Citation Mustang, a very nice smaller twin jet. It was interesting that it had similar capabilities to my Bonanza in terms of payload and range, the main difference being that what takes 3-4 hours in the Bonanza takes 2 hours in the jet. And of course the jet can fly over all the weather (I have flown my Bonanza at 25,000 feet but we flew at 40,000 buy lorazepam online us feet…)

In my plane, there are many options. You get to actually _fly_, although not as much as if you are in a smaller Cessna 152 or 182, often used for flight training, but – you get to _fly_. The jet is a different story. It is almost always flown on an IFR mission, which means there is often a departure procedure, a specifically designated enroute flight plan, and an approach and landing procedure. What does all this mean?

Generally the flight management system and the autopilot fly the plane, and it is the job of the pilot to manage the systems. Sure, we did lots of systems management in the Bonanza also, but there weren’t as many requirements. Flying the jet is a series of specific procedures and requirements, and they must be followed.

I love the mission capabilities of the little jet, and it was very interesting flying mostly higher than the other airline traffic and being able to see all the commercial jets below us – rather than sitting under the clouds and hearing about the jets and wondering where they were – but it seemed much less like flying and much more like a management job to me.

Of course if I complain about $200 an hour just for fuel in my plane and the jet is more like $1000 an hour for fuel, well, there’s another reason I don’t plan to buy one anytime soon. The entry price of a used Bonanza like mine was 120k-150k. The little jet was more than 10x that.

But gosh it was fun to sit in the right seat for a few hours. It didn’t hurt that the pilot was one of the best I have ever flown with, either.