Home/real estate/What makes some people more successful than others?
Previous Next

This is a question I have been asking lately. I have some friends who are very, very successful, and some other friends who are, well, let’s just say that they could be doing better. I have had long talks with people I respect, wondering about what things are innate and what things are learned, or are a result of a decision we have made in our past.

Some things, like sexuality, for example, seem to be innate. If you talk with a preschool teacher, they can tell you that there are some boys that act more like girls, and some girls who act more like boys, even when they are two or three years old. And, some things are genetic. As a rule, Asians are better at math than most people, when you look at larger groups. Blacks dominate the NBA. Whites are good at chess. So some things are innate, genetic, or learned –

A very smart person who deals with change all the time tells me that even innate stuff can be changed, because if we want it bad enough, we can get our genes to express themselves in a way that supports what we want.(I always wanted to be a world class gymnast but I didn’t start until I was 30, I’m not what you might call skinny or light, and I’m 6’2″ tall so this goal seems unlikely, but still, I did get pretty darn good at it)

In the never ending journey to learn more stuff, I was reading Daniel Goleman’s Emotional Intelligence. This is a book that discusses why our emotional intelligence is probably more important than our intelligence quotient. The book is a wonderful read, though a little heavy at times, but brings up studies that are really interesting. One of them is the Marshmallow study that was done with some four year olds in the 1960s by Walter Mischel at Standford. I won’t quote the whole thing, but here is the setup and some pertinent results:

“Just imagine you’re four years old, and someone makes the following proposal: If you’ll wait until after he runs an errand, you can have two marshmallows for a treat. If you can’t wait until then, you can have only one—but you can have it right now. It is a challenge sure to try the soul of any four-year-old, a microcosm of the eternal battle between impulse and restraint, id and ego, desire and self-control, gratification and delay. Which of these choices a child makes is a telling test; it offers a quick reading not just of character, but of the trajectory that child will probably take through life. ” 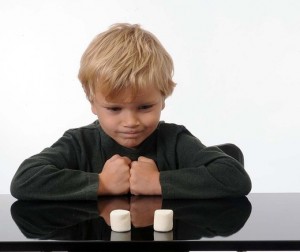 Roughly a third of the four year olds were able to delay their gratification so that they could get two marshmallows. And one third grabbed the marshmallow as soon as the researcher had left the room. What happened to these two groups later in life? The kids were tracked and assessed some twelve or so years later:

“Those who had resisted temptation at four were now, as adolescents, more socially competent: personally effective, self-assertive, and better able to cope with the frustrations of life. They were less likely to go to pieces, freeze, or regress under stress, or become rattled and disorganized when pressured; they embraced challenges and pursued them instead of giving up even in the face of difficulties; they were self-reliant and confident, trustworthy and dependable; and they took initiative and plunged into projects. And, more than a decade later, they were still able to delay gratification in pursuit of their goals. The third or so who grabbed for the marshmallow, however, tended to have fewer of these qualities, and shared instead a relatively more troubled psychological portrait. In adolescence they were more likely to be seen as shying away from social contacts; to be stubborn and indecisive; to be easily upset by frustrations; to think of themselves as “bad” or unworthy; to regress or become immobilized by stress; to be mistrustful and resentful about not “getting enough”; to be prone to jealousy and envy; to overreact to irritations with a sharp temper, so provoking arguments and fights. And, after all those years, they still were unable to put off gratification.”

As these kids finished high school, the ones who could delay gratification had dramatically higher SAT scores. The author concludes that how children perform on their gratification test is a much more powerful predictor of of their SAT scores and general success than IQ. Poor impulse control is also a good predictor of delinquency.

Psychologists generally agree that IQ does not change throughout life; but there is strong evidence (read the book!) that we can change our EQ.

Goleman talks about other things that make up our EQ, too. Such as hope, anger, fear, anxiety, optimism, and a host of other emotions. How strongly we value different emotions is a great predictor of success. Another study in the book was about insurance salesmen. A particular company tested people and was hiring new salesmen based on the profile their existing top producers shared.

Another researcher convinced the company to hire a group of new salespeople, generally unskilled (compared to the other hires) but based their employment on how strongly they scored on a test of optimism. In the first year, the “optimistic” salesmen outsold the others by almost 50%. In the second year, it was by far, far more.

If you have followed this blog much, you know I like what Tony Robbins teaches. He teaches stuff just like this. He teaches us how we can intentionally control our emotional states. One of my more recent posts (The One Decision) is about deciding to live in a beautiful state. If aspects of this state include hope, optimism, gratitude, delayed gratification, and other strong predictors of performance, what will your life be like if you choose to embrace them? Given two professionals you can hire to do a job, will you hire the happy, optimistic one that wants to think about how best to solve the problem, or the one with the black cloud over their head, who never has time, gripes about things, and shows up to do the job and wants payment up front?

Sure, it is a concocted example — and in my industry (Real Estate) I have met both kinds, and many of each! Can you guess which ones I am most likely to hope is on the other side of a transaction? If you are single (this is something I learned the hard way many years ago) what’s the best way to act to get a date? Needy? Happy? Confident? It is our emotional nature which gets us where we want to go. Given two people with similar capabilities and intelligence, the one with the stronger control of their emotions is the most likely to succeed.

Yes, sorry, another post not really about real estate. I’ll be getting back to that in the future.